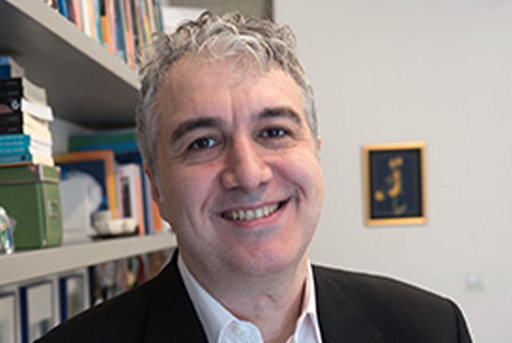 He was born in İstanbul in 1966. He graduated from the Işık High School. He organized the 1st İFSAK Short Film Festival while he was studying at the İstanbul University, Faculty of Business Management.
He went to Paris in 1990 and studied editing and scriptwriting at CLCF. He obtained undergraduate and graduate degrees on cinema at the Denis Diderot University (Paris VII).

During the same period, he did his internship in various post-production companies (Chevereau), while he continued his career in photography (CNCS).
In 1993, he ranked among top ten in the Ciné-Litterature competition with his first short film script project
(La Mort d’un cœur mouette). He started his doctorate studies at the Sorbonne University (Paris I) in 1997. He presented his dissertation on the idea that every scriptwriter should be considered a creator per se, around the life and works of a French scriptwriter JeanLoup Dabadie highly successfully in 2002.
During his master of advanced studies year (DEA), his preliminary work on his thesis won the Simon Genevois Best University Study Award granted by the French Critics and Filmmakers Association (Pierre D’Hugues, Bertrand Tavernier, Claude Beylie, Claude Sautet). He accepted his award personally presented by Claude Sautet.

He has been teaching scriptwriting, dramatic narration, writing for cinema and television at the İstanbul Bilgi University since 2000. He has been a script doctor for various films and TV series, and a script consultant for foreign organizations (Eurimages) since 2006.
His book titled “Senaryo Kitabı” (Script Book) was published in 2010 and won the “Anadolu University Best Cinema Book” award the same year.